This post is part of the Insecure Writer's Support Group 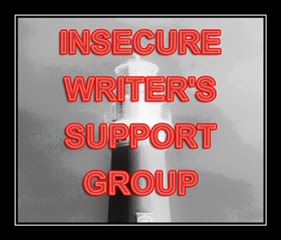 The muse circled around my house a few times last month, but admittedly there were times I pretended not to be home. Sometimes it was simply a matter of not being able to get to my laptop for more than a few minutes at a time. But most times, it was a case of nerves. I remember discussing this with a fellow writing friend, the infamous Magaly Guerrero (I'll blog about meeting her on my trip to NY later this week). Although I am comfortable singing and acting on a small stage and even shimmying in revealing cabaret bellydance garb in front of an audience, I don't think either of those experiences prepared me for how naked I feel when I write. And then there's the thought of sharing what I write!

Last week I read a rather harshly written article imploring J.K. Rowling to just stop writing. The first time I read it, I thought, "Wow, even someone as well known and well loved as J.K. Rowling gets judged and ripped apart harshly! There's no way my work could escape that kind of criticism!" *crest fallen face*

But then I thought about it some more. "Wow, even someone as well known and well loved as J.K. Rowling gets judged and ripped apart harshly! There's no way my work could escape that kind of criticism!" *enthused face*

Yes, someone out there (probably many someones out there) are going to say snarky and mean things about me and my writing at some point. It's guaranteed. I guess, if I know a rainy day is coming no matter what I do, then it's easy enough to put up an umbrella and just ride it out until the end of the storm, rather than sit and panic in a puddle.

I was also inspired to pick up The Casual Vacancy this month. Great read. It certainly isn't for everyone, especially if you are expecting something as fanciful as Harry Potter's world. But it is an engaging, if dark, character study of life in a small town. I will definitely be reading this again - after I read a bunch of fluffy silly stuff first!