The Cuteness of Corg (Resistance was Futile)

Figures, I thought, staring at the door. He’d use my love of anime to get me to face up to my worst fear. “Well, let’s get this over with,” I said.

Eric attempted to rope in his giddiness, but his glee came out in his voice. “I swear we’ll leave if you get too uncomfortable. It’s not like we’re getting a dog today. What’re the chances there’s a corgi here?” He held the door open for me to walk into the dog rescue center.

When we first started dating, I thought the differences in our religions would be one of the hardest obstacles to overcome. Nope. Eric was a dog lover. A raised-one-from-a-pup, had-wholesome-adventures-together, hard-core, unabashed dog lover.

Me? Well, a neighbor dog jumped on me when I was 4. I knew now that the face licking meant he was happy to see me, not taking a taste test. But you couldn’t tell 4-year-old me that. Since then, I had a hard time not running in the other direction, screaming as if Cerberus himself were about to drag me into the netherworld, if I saw so much as a chihuahua.

But Eric was persistent. I got to be comfortable with a dog walking on the same street as me. When I said the dog on the anime Cowboy Bebop looked cute, he claimed victory, researching that type of dog and extolling their virtues with all the zeal of an infomercial spokesman.

I walked through the doors, ready to bolt if it became too much. And there, in a cage right in front of me was a tiny corgi pup, shivering next to a St. Bernard. The attendant put her on my lap, we both looked at each other and stopped shaking.

“We are not leaving here without her,” I said.

“What are we naming her?” Eric grinned. 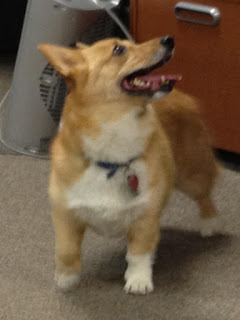 This was my Faye. We had twelve really great years together.
Thanks for making a dog lover, sweet girl.

Liner Notes for this Groove: This non-fiction prose piece was created for Pantry of Prose over at Poets United.