Death was the beginning.
No, it started before then.
Ivy, green and spreading,
just needing something to cling to.

It paid no mind
to the wildflowers
running freely where they willed.

Nor to the fact,
the wood was rotten to begin with.

Wanting only home,
objecting when pulled away,
still knowing no home is here.

Song Choice: If It Makes You Happy by Sheryl Crow

This post is part of Imaginary Gardens With Real Toads Flash 55 post. Go visit and take a look at some other great poetry.
Posted by Rommy on Monday, June 08, 2015 26 comments:

Update From the Real World

I think this might be my first blog post about real world happenings in a while. I've been really focused on living up to the promise I made to myself to get enough short stories written to have a real *gulp* book ready for publication. I have two stories that need a second run through, a Yuuki story that is ready for another pair of eyes besides mine, a Rina story started and notes/ outlines on a couple more stories, including a Cordelia one. I originally thought I'd have seven in this collection, but that might be too little. I'll have to see what all of them look like once they've been edited at least once before I decide.

In between writing, I've been working on tea and belly dance. I find I can write a bit better if I keep active in between writing sessions. I think I'm finally getting this new tea form, which means they'll be throwing another one at me soon. Also I had the chance to play with my veil fans again on Monday night lesson. I forgot how much I loved working with those props. It makes me want to dust off the routine I choreographed for them awhile back.

I'll be back with a new poem for the blog soon. In the meantime, let me know if you'd like to see more real world updates from me from time to time. 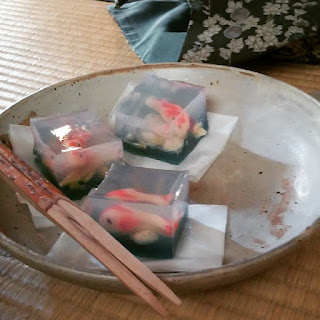 Tea sweets from a recent lesson. The classmate who made them is quite talented!

Song Choice: Here I Am by Sertab (this is the song I choreographed the veil fan routine to)