Giichi opened the dogu box honoring his brother on the family shrine. Would blasphemy make matcha taste even sweeter? Yuuki would not have shied away from either thievery or blasphemy if it stood between him and a perfect bowl of tea.  His heart thumped as he pulled out a tea scoop. Yuuki had sacrificed himself because Giichi’s failed attempt at stealing dogu refined enough to use with it. The rightful owner caught him in the act, demanding Yuuki’s servitude in exchange for Giichi’s life.

No one was here to thwart his thieving this time. Making a bowl of tea with this particular scoop would be a better way to honor Yuuki than letting it remain unused.

Giichi had been snooping around his brother’s room the first time he held this scoop. As he pulled it out he heard, “Can I help you with something, ototo?” from behind him. Yuuki stood where a flower arrangement had been a moment before. Giichi hadn’t realized that he could change himself into smaller, non-animal objects yet. At 180, Yuuki was young for a kitsune to be able to do that.

“Did you really steal this from a warlord?” Giichi said.

“No, I stole it from a merchant. One of my bowls was from a warlord, but it was a gift,” Yuuki came over to Giichi and took the box. “If you ask nicely I will show all my dogu to you.”

“To eyes that rush maybe. That’s why it’s best to ask. You can take the time to appreciate them. Each has a special name, sometimes associated with something seasonal. This one is called Ginpu,” Yuuki said, lifting one.

Giichi studied the scoops. “I like the first one,” he said, picking it up. “What’s its name?”

“Its previous owner didn’t tell me. I suppose I’ll have to think of one.”

“Yes, but put it down carefully. Each tool should be handled like you are saying farewell to a dear friend whom you are unsure of meeting again.”

The next day Yuuki performed a ceremony for Giichi’s amusement, claiming he needed to practice a special form reserved only for royalty. Though he knew nothing of tea etiquette then, Giichi played the part of the noble. He had fidgeted, wolfed down every sweet Yuuki had talked a cousin into preparing, and demanded Yuuki name the scoop “Prince Giichi” even as his affronted cousin rolled his eyes at the inappropriateness of the name.  Still, Yuuki kept the name until the day he was stolen.

Giichi’s mind returned to the present as he made himself a bowl of tea. He handled each tool just as his brother had taught him, and drank. It was exquisite.  He picked up the scoop again.

“When I find you, oniisan, call it whatever you like. But while it’s mine, its name will be Matsuyuuki. Each bowl I prepare with it honors you.”

dogu: tools used in Japanese tea ceremony
ototo: little brother
Ginpu: "reading poems in the autumn breeze while moon gazing"
oniisan: big brother
Matsuyuuki: literally "snow covered pine", which is a fine name for a tea scoop, but it is also a play on Yuuki’s name (which means snow) and pine, which oddly enough has a similar double meaning in Japanese and English (both a tree, and to wait or long for something).

Song Choice:  My Hero by The Foo Fighters 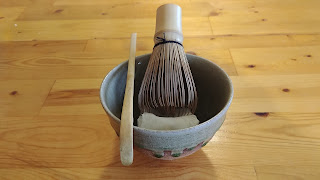 This is some of my dogu.

This short story was created as part of October's Heart Bits With Magaly: Love is Love is Love and Words. Follow the link to see other fun offerings. Long time readers might remember Yuuki from several short stories I've written before. If you are new to the blog and curious as to what actually happened to Giichi's brother, you can read about it here.

“Taste, then understand,”
the crone whispered.

Apprentice tasted
spring rains on her skin,
rich loam through her toes,
before feeling blossoms torn,
scorched stiff by oven,
and finally melting on tongue.

This poem was created for the prompt given at Imaginary Gardens With Real Toads, Fireblossom Friday: I Put A Spell on You. It is also linked to Verse Escape's Friday 55.
Posted by Rommy on Thursday, October 05, 2017 41 comments: