I have to thank my husband for a lot of things. He's one of my biggest cheerleaders, especially when it comes to writing, and he's inspired me in a multitude of artistic endeavors. So when I told him about the 300 word Master Writing Challenge, he got excited, but for both of us. He loves to write as well, but he doesn't get as much time to play with words as he'd like. This was the perfect short project he could play around with to get his creative juices flowing.

Now the idea to go with a pseudonym was mostly his - he worries a bit that his outspoken wife will get backlash. So I decided if I was going to go with a pseudonym, pretty much everyone mentioned on my blog (who doesn't have a public persona they aren't comfortable using) would get one too. I thought of ones for two of my closest friends right away - Absinthe and Oolong.

"I want to keep up a beverage theme and those kind of go with their personalities," I told him.

"Maneshevitz, Manny for short," I quip.

He wasn't at all crazy about that. After making some jokes about wanting to be named after something I like to drink (I can hear the snickering of all the dirty minded folks as I type this), I realized, this is hard. Is there a good drink that sums up a guy who is a weird blend of Oz from Buffy the Vampire Slayer, Joscelin Verruil from Kushiel's Dart and Ron Stoppable from Kim Possible? He is lobbying hard for Mojito (I think not) though PG-Ice (Peach Green Tea, Iced) has an interesting ring to it .

So I'll leave you all with a song that always makes me think of him and his take on the 300 word challenge. It's funny - I actually called the book and the genre he used before I even saw it.

Rough day?" The bartender asked, glancing at his six shooter.

Jessie eyed him briefly touching the dried blood on the side of his head.  "Whiskey" Jessie said motioning towards the glass.

"You know where I can find a man called Travers?"

The bartender just shrugged nodding his head towards a card game going on in the far corner.  "Oh and if you see a man with a red sash on his leg let me know, I owe him".

Thirty minutes later Jessie and a man with long black hair were the last ones at the table.  Jessie licked his lips and eyed his cards.  Something caught his eye outside the swinging bar doors.  A red sash on a man's leg.  Jumping up as he turned he felt a hand grab his shoulder.

"You can't walk away", his opponent said.

Jessie pulled away barking out "We'll settle this at noon, outside".

The man seemed satisfied and let go.  As Jessie went through the doors he collided with a man entering.   The man sprawled backwards and in to the street.    Jessie looked frantically for the sash.

"Slap leather yellow-belly!"  the muddy man said as he went for his pistol.

Jessie, raised his hand and started to move off.

With that Jessie raced down the street, drawing his pistol.  Turning a corner he stepped in a large mud puddle which splattered on a couple standing to the side.  They were dressed in the finery of city folk.  The man's cane swung up and stopped his momentum.

"You will apologize, trash" the man said disdainfully.  Jessie, pushed the cane aside with his gun.  He had no time for this.

I Can't Wait To See The Commercials

My husband and I work for the same company. Although I work from home most days, I usually come in once a week to touch base. There's a standing joke in my group that whenever he comes down to visit me, they all call out "darling" or "honey" because of how openly affectionate we are towards each other.

There's a guy in my work group (I never know if it's more proper to refer to him as co-worker or boss, because although he isn't technically my supervisor, a lot of the work I do gets coordinated through him). He's been with the love of his life almost as long as the hubby and I have been together (them around 15 years, us a little over 18). And while he could probably get away with sweet talking his significant other in the office, outside of work it'd be a different story. Despite the amazing and wonderful decisions the Supreme Court announced this morning, in the eyes of Pennsylvania law, his relationship doesn't have the same validity as mine.

It's a huge step we've made as a county today, but it's only one step. Heck, there are a number of steps to go with the way my marriage is viewed. You see, I'm Latina and my husband is of Eastern European (Ashkenazi) Jewish descent. Not too long ago there was a big kerfuffle over a cereal commercial featuring an intermarried couple. It seems some folks still aren't ready for that, even in 2013.

My kids shrug when I try to tell them how important this decision is. Why does it matter to anyone who someone else chooses to marry? It's not a big deal to them. They've had the luxury of growing up in an extremely racially diverse family, in a fairly tolerant Northeastern suburb. It's not a giant jump of logic to understand that if love knows no racial boundaries, then there shouldn't be any gender boundaries. It's weird to them people care at all. They also don't go around thinking "I'm a biracial kid" or "My parents have an interracial relationship" (I actually did stop my son to ask that). It occurs to them that yes, their parents are from different completely cultures, but although there is a distinct difference between a Brooklyn and a Peruvian accent, at the end of the day, the grandparents from both cultures just want to fatten them up.

I look forward to the day when kids being raised by gay parents just shrug things off and don't think that their family is all that different from everyone else's. It's nice thinking of a future where there's a commercial with a gay couple and no one thinks anything of it, because it's a pretty commonly accepted thing. No, we so aren't there yet. But we're a bit closer. I saw all the memes this morning, read a bunch of headlines, but nothing quite touched me until I read the aforementioned co-worker's/ boss's facebook status:


June 26th. History has been made. Thank you.

I cried a bit when I read that. Hell, I'm misting up now just re-typing it. Because in the end, it's really all the same love.
Posted by Rommy on Wednesday, June 26, 2013 4 comments:

My main reason for starting this blog was entering a contest, the Word Master Challenge, proposed by Misha Gericke in her My First Book blog  The challenge was to recreate a scene from a favorite famous book in a completely different genre. Try to recapture the feeling of the story and scene as best you can without trying to slavishly reproduce exact details. Oh yes, and do it in under 300 words! 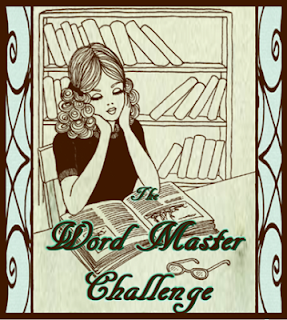 So here's my entry. Can you guess what story it's from originally?

Red grunted. I don’t know what smelled worse, him or the old warehouse we were making our way through. His wino cover sure smelled like the real deal.

Min had to be here somewhere. The chief would lose it if she found out we were here after the order to pull out. But it was kinda our fault she doubled back this way, with no way of knowing there was a junkie, armed with a bomb, in here. We had a good idea which way she went though, and figured we’d be in and out before the chief knew.

“She doesn’t need to talk about what hot shit she was at the academy 24-7,” he muttered. “If I wanted to I could…”

A scream came from a bathroom on the right. Red kicked the door in and we charged through. I could just make out Min pinned on her stomach by the junkie, who was gnawing on her head. Her gun lay a few feet away. The junkie raised his head when he saw us, mouth filled with Min’s wig. She was a mess, but still alive.

Red leveled his gun. “Back off asshole.”

The junkie looked up, glassy eyed. His jaw slackened, dropping the wig. For a second I thought he’d come quietly. Then screaming “Las Culebras!” he ran towards us.

I swung out with my right, but he caught my arm. My free fist connected with his nose while Red pistol whipped the back of his head. He was down.

Min pointed, “You mean that?”

A jumble of trash held by duct tape sat in a puddle.

This is my first official blog post ever, so I figure it makes sense to introduce myself a bit and describe the blog.

So what the hell is this blog about?

Beats me. I started it primarily because a blogger I admire, Magaly Guererro, keeps posting these really neat writing contests/ ideas/ blog parties and I wanted to play along. I guess it will be mostly a forum for my writing but I do reserve the right to write about whatever interests me at the moment. Topics will likely include most of the stuff mentioned under "likes" and likely exclude things like celebrity gossip, sports, and crazy conspiracy theories. Also note I tip to the left politically, so if that's an issue, well, I'm sure there are other blogs that will suit you better.

I'm still fond of it however. I started using it quite while back when first seriously learning about Paganism. I happen to rather like kestrels (the falcon from which my name is derived). They are pee-wees as falcons go, also colorful and fairly loud. Kestrels are one of the few birds that hover, taking their time and assessing the situation before they strike. You'll find I am always joking about my height, love wearing bold colors and I like to take my time to come to an opinion before I swoop. Still really hate it? That's cool. I'm sure there are other blogs out there that will suit you better.

So are you going to write about witchy stuff, teaching me the spells to cast fireballs, ride broomsticks and turn my ex/ my teacher/ my boss into a toad?

Er, no...if that's your thoughts on Paganism and Witchcraft, you're going to be mighty disappointed. You may want to pick up some good books on the topic. There's an excellent chance I will discuss Paganism in general, but it will likely be very general. If you are looking for a conpendium of spells and rituals, sorry, that's not what's going to show up here but - everyone sing along now - I'm sure there are other blogs out there that will suit you better.