Although logic told her it was only a few feet away, Stacia’s bedroom door may as well have been on Mars as far as she was concerned. She had been staring at it for over an hour now. She thought about getting up to shower at least twice, but the most she had managed to do was scratch the side of her neck.

Her stomach growled. She barked out a laugh, more startled than amused. Such an ordinary noise felt so strange in the silence.

That means I’m hungry, she said to herself. Though she didn’t feel enthused about the idea of eating.

Eat, she told herself more forcefully this time. It can be anything. It can be something small. Just eat.

After her stomach insisted again, Stacia got up, lumbered towards the door and left her bedroom. The sight of her cluttered living room almost made her turn around. But it was easier just to keep going in the same direction.

She pulled the plastic container out, closed the door, and sat of the kitchen floor. Not bothering to wash them she grabbed the nearest strawberry and took a bite. Stacia thought back to how when she was a kid her mom would set out a bowl of condensed milk for her to dip strawberries into on Saturday mornings. She made herself eat the second strawberry more slowly. There might be condensed milk in the pantry.

I can do this. Stacia got up, still holding the berries, and grabbed a can opener along with the can of condensed milk. She went to the couch and looked at how far she had come. The bedroom door still looked miles away. But now she had strawberries and condensed milk, and she knew she’d be able to find a favorite cartoon or two on a streaming service. That was enough.

Song Choice: Breathe Me by Sia

I’ve always admired the geektasticness of cosplay. For those of you not as steeped in nerdiness as I am, cosplay is when folks dress in costumes meant to resemble their favorite characters in film, television, comics, books, etc. (here’s a quick little video to give you some visuals). Cosplay can be seen as a tribute of sorts to those works of art that inspire the cosplayer in some way.


The first time I cosplayed was my senior year in college with my then boyfriend (now husband).


I really haven’t done much cosplaying since then, because it can be a time consuming (as well as money consuming) hobby. But quite recently, my whole family is in planning mode. An honorary niece has a Bat Mitzvah coming up, and she has asked that her guests come in cosplay.

We’ve been joking around a bit about who we should dress up as. I’ve trying to convince my husband that Miss Crumble (Daybreak) and Koro-sensei (Assassination Classroom) could be a very workable couples' costume as they are both dedicated educators (who also happen to be batty). Darling Youngest is lobbying for something Steven Universe based (they want to be Steven and thought the hubby and I could be Greg Universe and Amethyst…they really don’t care what their older sibling does). The hubby would like to consider more options. Darling Eldest is in the middle of college classes but will probably figure out something during spring break.

I do know for sure what one of the cosplays will be. The Bat Mitzvah girl is a big reader and she wanted to base her cosplay around a short story she really liked…one of mine! The kiddo is going as Cordelia from “Make Mischief Not War”, from my short story collection, The Trouble with Wanting and Other Not-Quite Faerie Tales.

Yeah, I got misty-eyed. This is kind of bucket-list territory for me, having someone like one of my characters that much. I’m going to be so stoked to see “Cordelia” swing dancing in a ballroom.

Song Choice: Talk Nerdy to Me

So are there any cosplayers out there? Any suggestions for costume ideas? Feel free to make them in the comments section.

This blog post was created for Weekly Scribblings #7: This is a Tribute
Posted by Rommy on Tuesday, February 18, 2020 50 comments:

The apple doesn’t fall far from the tree,
except of course when it does.

And who’s to say what will happen
once it’s done falling.

with hills just perfect for rolling in.

This poem was created for the Weekly Scribblings over at Poets and Storytellers United.

I remember when I first saw her.
I composed the hymn in my heart right away.

I can’t remember the other things
on display at the museum that day.

I only had eyes for that large dark flower
taking up most of the space in the composition.

for a goddess who taught me
how very beautiful
and worthy of admiration
darkness can be. 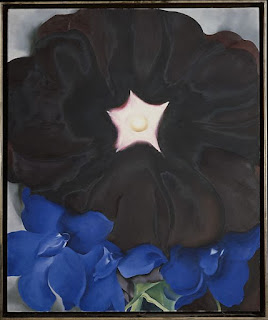 Liner Notes for This Groove: In high school we had a trip to the Met in NYC, which is where I first saw Black Hollyhock and Blue Larkspur by Georgia O'Keeffe. I bought a print and wrote my first 'for fun' (as opposed to 'for homework') poem when I got home. I remember that I wrote it in the form of a prayer (I think I was inspired St. Francis's Canticle of the Sun) and that I liked it well enough to submit to my high school's literary magazine. And they accepted it! I think it was the first time it crossed my mind that I might enjoy this writing business.

Song Choice: Who Says by Selena Gomez & The Scene
Posted by Rommy on Tuesday, February 04, 2020 50 comments: