For the Sake of My Beloved

Between sighs of pleasure, I open
my eyes and see
this world has teeth.

I cannot feign surprise.
Only fools think beauty
doesn’t have roots in darkness.

(It was there I found you.)

Monsters and angels sing
in the same key, leaving the listener
to decode the lyrics of their songs.

You taught me to sing too,
with a voice I found
at the crest of delight.

(It was there I found myself.)

I can shut my senses to it all.
But the brush of your lips on my skin
is not something I want to pretend away.
And pretending it’s safe only makes me prey
for things with less innocent intentions.

The price of honey is the risk
of being stung. I didn’t forget.
That doesn’t mean I can’t
find my own stinger and teach
monsters to tremble instead.

This poem was inspired by the prompt I created for Imaginary Gardens With Real Toads: Of Angels and Monsters. I asked the Toads to select from a list of seven quotes related to monsters and angels. I chose two of them.  “I’m the thing monsters have nightmares about.” from Buffy the Vampire Slayer and “One may tolerate a world of demons for the sake of an angel.” from Doctor Who.
Posted by Rommy on Thursday, May 25, 2017 55 comments:

“Trash!” she shrieked, hurling another rotten fruit in Aiko’s direction.

After a month of this, you’d think her aim would have improved, even a little, Aiko thought as she loosened the hold between the broken china and bent cutlery that made up her body. The pieces of herself rearranged to fit between the gap between the wall and the restaurant’s industrial freezer. They didn’t resume their normal configuration until she got to her nest in the crawlspace in the wall.

Once inside Aiko examined the filleting knife that served as her sword. Satisfied her weapon was as sharp as ever, she laid it down and examined herself. She hadn’t lost too many chips this time, but the crack on her breastplate had gotten bigger. Aiko could swap it out any time she liked, but couldn’t bring herself to do it. It was a gift from the original owner of the restaurant.

Aiko kept the restaurant free from pests, from hobgoblins to roaches, for a decade. Of course she didn’t expect the new owner to salute her, or even sit and share stories and sake with her. But to have her cracks and dents earned through battle mocked! She didn’t have any other place to go, but she refused to linger where she was disrespected.

She was contemplating which of her personal effects to take with her, when she heard a rapping on the wall. Aiko picked up her knife and went out.  Tucked into the space between the freezer and the wall was a paper cup with sake, and a note. “Dear General, please stay.” It was signed by all of the kitchen staff.

Aiko folded the note as tightly as she could and tucked it in the crack of her breastplate. She took the sake home, and placed the paper cup in a place of honor among her things. 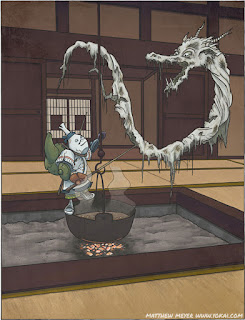 Seto-taisho by Matthew Meyer
Find more of his amazing art and fun facts about yokai
at yokcai.com

Process Note: Aiko is a type of of yokai (Japanese faery creature for lack of a better translation) known as a seto-taishoo, a little soldier made of broken kitchen things.

This short story was inspired by the prompt given at Imaginary Gardens With Real Toads: Mythical Prejudice, where we were asked to explore prejudice from the point of view of a mythical creature who is part of our modern world.
Posted by Rommy on Sunday, May 14, 2017 19 comments:

Today is Beltane, which leads the mind to linger on...well, perhaps that's best expressed in some of the poetry I've written.

Nightingale Hours has been a popular piece ever since I wrote it a year ago. It certainly suits the theme of Beltane quite well, so I thought it'd be fun to record it in honor of the day.

Wildness floats around you,
wolf wicked,
but I’m no little girl
to be dandelion led.

I am a pebble-strewer,
hoping you’d find your way
to my hidden home.

Delight-whisperer, come
find me quick
amid the mysteries
of the sentinel forest.

Bring your power
midnight mage.
I’ve plenty of my own.
Bring your passion
moon brigand,

and see that I
am just as adept at stealing
kisses and nightingale hours
as you are.