Hallowed Be Thy Flip Flops 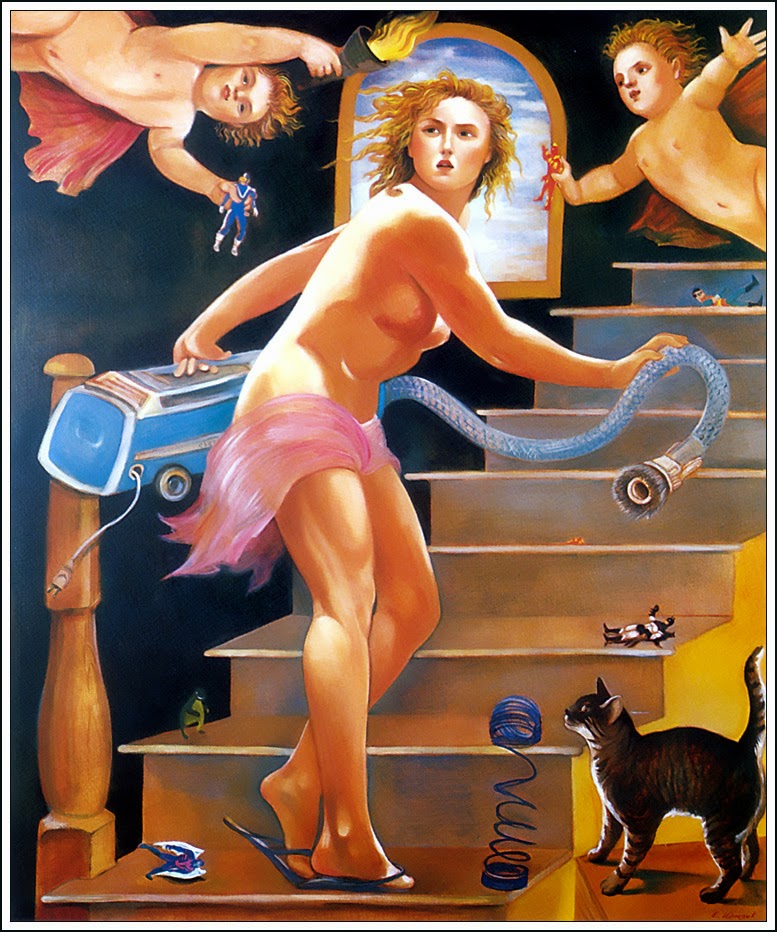 The door shut behind him. Sal realized how poorly the water company uniform fit him. He crossed himself as the imposing woman glowered at him.

“You are not the Mother’s Helper I requested,” she said.

Her hair billowed around her, though there wasn’t a trace of breeze in the air today. The same enigmatic wind held up the see-through pink cloth doing a poor job of hiding her butt. A pair of dollar store flip flops finished her look. For a second, her boobs were hidden by the canister vacuum cleaner she held, but when she turned to look at him everything was in full view.

“What is your purpose here? Be quick about it! I have a full afternoon ahead of me and an even longer evening.  I can’t afford lengthy interruptions.”

“I, um, I…” Sal strained to remember what he wanted to say.

A small child floated into the room, outfitted similarly to his mother but his cloth streamed out behind him like a cape. He was contemplating an action figure held in his chubby fist until he saw Sal standing at the threshold. “No poems can please for long or live that are written by water drinkers.  Horace,” the child said.

A second child swooped in, this one holding a torch as well as an action figure. “In the world there is nothing more submissive and weak than water. Yet for attacking that which is hard and strong nothing can surpass it.  Lao Tzu.” He flew at his brother with the action figure in front of him. The two started rough housing in midair.

“Boys!” The Mother dropped the vacuum and grabbed them both by the cape. The wriggling children didn’t seem too bothered by this and continued to mash their figures into each other until the Mother took the toys and the torch from them.

One child pouted, looked at Sal and said, “Heavy hearts, like heavy clouds in the sky, are best relieved by the letting of a little water. Christopher Morley.”

Sal remembered why he came and blurted out. “I’m here from the water company. I need you to turn off all your water so that I can check your pipes.”

The halo around the Mother flared, blinding Sal for a moment.

“In a closed society where everybody's guilty, the only crime is getting caught. In a world of thieves, the only final sin is stupidity. Hunter S. Thompson,” the other said.

“Oh for the love of Me! Really? REALLY? Do I look like someone who would fall for a scam like that? Ugh! I don’t have time for this!”

The Mother pointed at Sal and an action figure clattered to the ground where he once stood.

One of the children picked up the new action figure and floated to the Mother, laying a hand on her shoulder. “Time is a game played beautifully by children. Heraclitus.”

She took the figure from her son and smiled. “Oh, I guess it’s not like Elpis has not seen a disordered house before. I can be a little late to that earthquake.”

Her other child nodded, “A mother is a person who seeing there are only four pieces of pie for five people, promptly announces she never did care for pie. Tenneva Jordan.”