It is cold up here on this pedestal.
And the up-lighting is bothersome.
To avoid being blinded,
I must look out
at the rest of this room,
where sometimes, if I am lucky,
I see and hear the music
I love being played.

I was happier in the attic.
It was dusty,
but I was among family.

A karakasa-kozō
would tell us
how he saved an army
by keeping battle plans dry.
On full moons the chōchin-obake
would describe every festival he lit up:
the sounds of the children,
the smells of the food,
the colors of the kimonos.

And I would tell stories
of the accomplished geisha,
incomparable in music, writing, and dance,
who, assisted by me,
won the hearts of all who heard us play.
Even kami stopped to notice
when we sang.

Then the attic was opened.
I found myself here,
revered but untouched,
watching instruments too new
to have a wit of their own,
played mostly by novices.

Oh, some show promise.
But all are afraid to touch me.
A relic’s only purpose is to decorate,
even when they’d prefer
to risk being broken
over not being played. 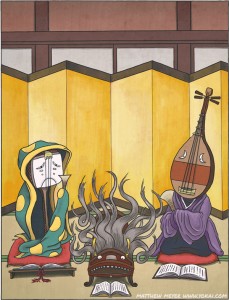 Shamichouro-Kotofurunushi-Biwabokuboku illustration by Matt Meyer
curator of one of the most informative and beautiful sites devoted to yokai lore, yokai.com
as well as author of two amazing books, The Night Parade of  One Hundred Demons: a field guide to Japanese Yokai
and  The Hour of Meeting Evil Spirits: an Encyclopedia of Mononoke and Magic.
(I did the biggest happy dance when he said I could use this picture; I'm a long time fan.)

Process Notes: Whew! This is my second attempt at combining two prompts. The first one was given by Magaly Guerrero with her Dark Poetry for the Cruelest Month prompt: Poetizing Japanese Folklore. The second one was entirely my fault, as it was my first prompt as part of Imaginary Gardens With Real Toads: The Way of Tea (select a poem by Sen Rikyu to base a new poem around. I chose "Once a flower’s season has passed, it should not be brought in from another location for display in the tearoom."

The shami-chōrō, karakasa-kozō and chōchin-obake are all types of creatures collectively known as tsukumogami, old things that have a spirit animating them or have gained sentience through the passage of time. A shami-chōrō is a sentient shamisen (3 stringed Japanese musical instrument) that wishes to be played by its old master again. A karakasa-kozō is  an old oiled umbrella. A chōchin-obake is an old paper lantern.
Posted by Rommy on Wednesday, April 27, 2016

Email ThisBlogThis!Share to TwitterShare to FacebookShare to Pinterest
Labels: Dark Poetry for the Cruelest Month 2016