Emma started playing with the poison ring on her right hand when she noticed her fidgeting had put several creases in her dress. She spent a lot of time last night picking out the perfect things to wear today and didn’t want anything to spoil them.

She had chosen to arm herself with the pearl earrings Mother had given her after her first kill, her grandmother’s poison ring, her midnight blue dress with embroidered moon phases on the hem and of course a pin bearing the image of Synestra Nightjoy Dracul. The ache in her scalp from brushing and pulling her blonde hair into a razor sharp part before tying each side up into pigtails had finally abated, but the feeling like a hundred moths beating their wings against the inside of her head was still there.

“Miss DelSangre, it’s your turn,” Miss Garrote said, her smile pulling the bleached parchment of her skin even more tightly across her skull.

Gripping her papers, Emma walked up to the front of the class.  She looked at the picture of Torrance Dracul, mounted in the corner the teacher had claimed for her desk, took a deep breath, and started her presentation.

“My report is on Torrance Dracul, a famous prince from the noble house of Dracul. I know I’m supposed to tell you about all the important things he’s done. But that would be dumb. Besides the book Miss Garrote assigned me to read, I read a couple of others in my Mother’s library and have decided that Torrance Dracul is pretty much a disgrace to vampires everywhere.”

“Miss DelSangre,” her teacher said, glaring, with her pale skin pulling even more tautly, so that her veins stood out like the dark purple netting of a widow's mourning cap across her face.

Emma didn’t bother to glare back, but continued in an even louder voice. “It was his wife, Synestra Nightjoy Dracul, who deserves all of the credit for Torrance Dracul’s most famous deeds. The only thing he deserved was to have his blood drained out in front of a crowd.”

Emma’s delight at the gasps from her class was cut short as Miss Garrote dug her bony fingers into Emma’s arm and dragged her to the principal’s office. She shoved Emma onto the couch outside the office door, and slammed the door behind her as she swept in. The secretary, looked down at Emma from behind her desk, shook her head and went back to typing.

That small motion drained the last of her satisfaction in telling the truth about Synestra, and magnified one hundred times all the unease she had felt before getting up to speak. Not that the secretary had ever been especially nice to her, but she’d never just ignored her either. Her normally jolly principal even looked at Emma sternly when she finally opened her door to let Miss Garrote out and Emma in.

Emma barely remembered the rest of that evening at school, only that she said “yes” and “no” at the spots she knew she should say them until the principal was satisfied enough to let Emma sit on the couch outside her office again.  Eventually Bradford, her Grandmother’s butler, came to pick her up.
Emma clutched and twisted her skirt up in her hands on the ride home. Was Mother so angry that she didn’t want to come for her, so she called Grandmother to get her instead? Was Grandmother so angry she sent Bradford? Emma was afraid to ask, and Bradford didn’t volunteer any information on the drive back home. He silently let her into the house, and drove off again.

Emma ran directly to the great room, found the thickest, fluffiest, most blood red throw blanket there and cocooned herself up in it, not saying anything, until she heard her brother's footsteps walking up the hall.

“There you are,” Xander, face settling on what Emma recognized as his usual I-would-rather-be-tearing-throats-than-talking-to-you scowl. “Where were you? I was supposed to walk you home because Mother and Grandmother are at some sort of event until dinner.”

“I forgot,” Emma whispered. At Xander’s snort she said. “I got sent home from school early. Bradford had to pick me up.”

“You?” Xander arched a pale blonde eyebrow. “Are you sick or something? It’s not like you’d ever be sent home for getting in trouble.”

At that Emma started bawling, telling a flustered Xander about her plans to redeem Synestra Nightjoy Dracul’s good name and how they had gone so wrong.

“I don’t know if you’re brave or just crazy,” Xander said, putting his school bag down and sitting next to his sister. “Old Garrote would pour holy water on herself if the ghost of Torrance Dracul asked her to. Why would you do that in the middle of class?”

“To make sure everyone would hear me. Do you think Mother will be mad?” Emma said, curling further into the shelter of her blanket.

“She never got that mad at me and I’ve done way worse,” Xander said.

“Really?” She said, eyes widening. “But you never do anything wrong.”

“Shows what you know. Don’t you remember a bunch of times I was home before you and Mother said to let me be because I needed to dismember things on my own? It was because I got sent home, for way dumber things.”

“None of your business. Anyway, Torrance Dracul really was a mediocre vampire, just like you said. A rock shoved off the side of the mountain is a more inspired master of darkness than he was. But I would have left out the part about the blood draining though.” Xander paused a moment. “At least in front of Garrote.”

Emma hugged Xander who promptly squirmed away. “You really think Mother won’t be mad?” she said.

“Those were her books about Synestra that you read to write your paper weren’t they? I’ll bet you even get an extra helping of eyeballs at dinner.”

Emma belched as she got off the bus. Both Mother and Father had slid her an extra serving of eyeballs at dinner last night. Even Xander, who ate enough eyeballs and innards for a flock of vampires said he was too full to finish his portion and suggested Emma take it to school with her as a snack. She couldn’t help eating a couple on the bus.

She was trying to decide if she should eat one more or save them for lunch when a girl from her class, Vincenzia, came up to her.

“Emma, I liked what you said yesterday. About Synestra. Where did you get that pin with her on it?” Vincenzia said.

“I’d like one,” said another girl, and several other children started asking for one of their own as well.

“I’ll make enough for all of you,” Emma said, baring her fangs in a broad grin. 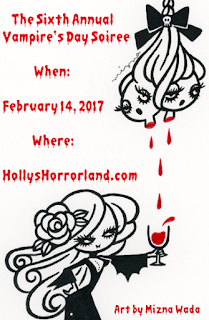 This short story was created for Holly's Horrorland's Vampire's Day Soiree. Go fly over and enjoy more vampiric delights at the main page.