Gwydion’s fingers were beginning to get cold but they weren’t numb. He didn’t mind though. There were still plenty of hours left to him, still enough time to ramble before he actually had to get his chore done and go back to his uncle’s home. A small chill wasn’t enough to make him want to go back any sooner than he had to. The fall day was sunny, but the crisp wind held the first warning of the winter to come. He wondered if the winters here were like the ones in Wales.

He picked up a stick and began batting at some milkweed stalks, setting seedlings to flight. Gwydion watched them soar and wondered if they could fly back there – to his mother’s old garden, his father’s old forge. Maybe if he sang an old song they’d know which way to fly. He hit a few more plants, until the air was so thick with seeds that he could pretend he was in a snow storm and then started to sing.

From behind him, another voice joined in.

“So that you must smile an answer
As you slumber on my breast?”

A small girl sat in the branches of a rowan tree, strawberry blonde curls as wild as the milkweed fluff dancing in the wind around them. Bare feet and legs stuck out beneath her flowing green shift.

The girl beamed. “Close, but you can’t be blamed for not knowing. Half actually, and that half is Ellyllon if you want to get it really right. The other half is Manitowuk. And I like that song. It’s pretty. My gran taught it to me when I visited her last summer. I can speak three different languages so far. My father says I have a gift for it. He is good friends with Unami chief and my mother was good friends with a Welsh prince. Do you know any chiefs or princes?"

Gwydion took a moment to figure out which one of the torrent of words to respond to.  “I’ve never met royalty, Indian or Welsh. My name is Gwydion Thomas. What’s yours?”

“Cordelia,” she replied. “And you’ve just met someone better than royalty. You met me! I was just on my way to sour some milk. Do you want to come with me?”

“I don’t know for sure if we do, but I saw some other fae doing it when I went visiting and it looks like fun. What did your mother say about Ellylon?” she asked.

He reached into his bag, pulled out some bread, tore it in two and held out the larger half towards Cordelia. “She told me to share if I see one.”

“Your mother is smart,” Cordelia said, grabbing at the bread. She bit off a chunk of it. “And her bread is delicious!”

Gwydion turned away from her, kicking a rock. “My aunt made the bread. My mother’s bread was much better than hers.”

“Oh,” Cordelia said. She looked around and kicked one rock, another then another until Gwydion turned to look at her.

“You can kick rocks pretty far,” she said.

Gwydion smiled, “Yes, I’m pretty good at it.” He puffed out his chest, drew back his leg dramatically and kicked a nearby rock as hard as he could.

Cordelia nodded her approval. “Come on! Let’s go!” She said, grabbing his hand. “You’ll be perfect for helping me sour some milk. There’s a place just a bit down the road from here.”

“No, not that one please. She’s my teacher and I know she’s been sick. I’ll give you the rest of my bread and my cheese if you don’t.”

“Really? Oh, all right then. Is there another place you’d rather go to?”

Gwydion handed over the bread and cheese. “How about Mr. Miller’s farm? He once told on me for climbing his apple trees.”

“Yes! Snitches should have their milk soured! Let’s go!”

When they got to Mr. Miller’s homestead Cordelia realized she didn’t remember exactly how the other Welsh fae had accomplished the trick of souring milk. Gwydion didn’t have any ideas either. The two decided to just play hide and go seek, after Cordelia promised not to use any fae glamour to cheat. They played until Gwydion saw that the sun had sunk down to brush the tree tops.

“I have to get back. I still need to pick some mushrooms up for my aunt.”

“Mushrooms! Those are my absolute favorite! I can help you find some good really ones,” Cordelia said.

“Sure I guess,” Gwydion said, walking back down the path. “But my aunt was really specific with what kind of mushrooms she wanted.”

He walked directly to the edge of a nearby woods, looking for the elm tree his aunt described. Gwydion found the patch of wrinkled, brown mushrooms and started to pick them.

“No, not those!” Cordelia said. “I can eat them of course, but they’d make you sick, probably even kill you. Here, I’ll take you to some that are really good.”

Gwydion frowned. “This is where my aunt told me to look and these are the mushrooms she told me to get. See?”

Cordelia crossed her arms. “Gwydion Thomas, are you going to believe a stinky human or a mushroom expert? Those are wrong. The cap is wrong and if you open them up they’re weird and cottony in the center.”

“Hey, I’m a stinky human! And anyway, my aunt’s going to be really mad if I bring her the wrong thing!”

“No she won’t. I know what the right thing is. They look kind of like these but are delicious and won’t kill you.” Cordelia stomped her foot. “It’s your choice. I’m telling you those are no good. If you die from them, I’ll make sure a ring of them grows on your grave just so people will know there’s where the silly boy who didn’t trust me lies.”

Gwydion looked at the patch one more time. “Alright, I’ll trust you.”

Victorious, Cordelia led Gwydion a bit deeper into the woods, near a dry creek. She pointed out a patch of mushrooms that looked similar to what his aunt had described, but the wrinkles were more like deep pits and the cap had a conical shape. He filled his bag with them and started off for home, with Cordelia skipping at his side. When they reached the saltbox house they said their goodbyes, promising to play together the next day.

Gwydion’s aunt boxed his ears as soon as she saw what he had brought him. He cried out and cowered down as she continued to rain blows upon him.

“Idiot boy! Wasn’t I very specific about which type of mushrooms I wanted you to bring me back? You’ll have no supper again tonight.”

After she was sure the boy was in his room, Mabli picked up one of the mushrooms. She cursed the boy’s uncanny luck. How did he manage to find these, especially when she had been so clear in describing the kind of mushroom she wanted? She’d have to find another way to get rid of him is all.

Mabli looked at the rest of them. These were quite beautiful morels and they would be perfect with the bit of grease left in the skillet from a meal she had cooked earlier in the day. It’d be a shame to waste it. The fire was still hot enough and the smell of the cooking food would be a good way to remind the boy of what he missed when he didn’t listen. She chopped up the mushrooms, went down to the root cellar, brought up an onion, chopped that up too and put them in the skillet.

As she ate the mushrooms she didn’t notice the small figure hiding in a busy corner of the kitchen also popping mushrooms into her mouth, with an equally satisfied smile. But Cordelia’s smile did not turn into a grimace the way Mabli’s did. Cordelia did not clutch her stomach, nor did she stagger from her sitting position, knock the plate of mushrooms to the floor and throw up nearby.

As Mabli started losing consciousness, she noticed Cordelia’s bare feet coming towards her. Cordelia crouched low, face to face with her, exaggeratedly popping one of the mushrooms Gwydion had gathered into her mouth. Mabli’s eye’s looked at the mushrooms that had spilled from the plate, noticing downy fluff in the center of a cut piece. Those were not morels. They were the ones she had taken pains to describe to the boy. As her face contorted in fear upon the realization, the faerie smiled and the words of an old lullaby were the last ones Mabli heard on this earth.

Slumber, slumber, naught can hurt you,
Nothing bring you harm or fright;
Slumber, darling, smiling sweetly
At those angels robed in white

Song Choice: Suo Gân, the lullaby used in the story. It first appeared in print decades
after the events in this story, but was a traditional lullaby before then 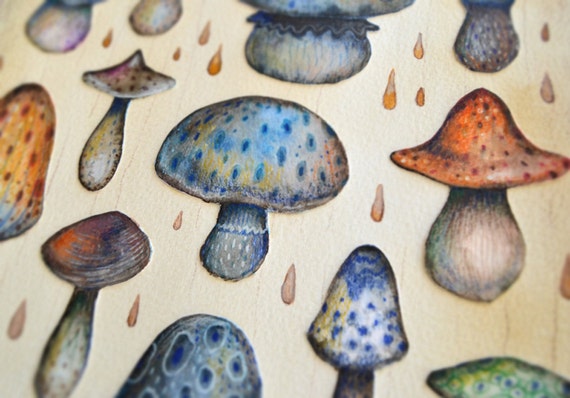 Image used with kind permission from the artist Vladimir Stankovic. The original print can be found in his Etsy shop, VladimirsArt.
Posted by Rommy on Sunday, March 01, 2015