Peace in a Bowl

When you serve tea to your guests, you should simply serve tea from your heart, and think about nothing more.
-Poem 93 of Sen Rikyu

I’ve spent years learning
how to set aside my worries at the teahouse door,
and lose myself
in the sound of pouring water
and the scent of matcha rising from the bowl.

Some days that isn’t easy.
The world likes to devour souls by bits
and I can’t drink enough tea
to wash the bitter taste from my mouth.

It is then I remember
tea bowls were meant for sharing.

The art of tea cannot be measured
by the strokes of my whisk
or the thickness in the folds of my cloth.
But it can be fairly gauged
by the smile on my guest’s face.

The peace that eluded me
roots in them, multiplies,
and finally alights in me.
When we leave the teahouse
we both carry more than enough
peace to share, where before there was turmoil.

Notes from the Real World (if you’re just here for the poetry, feel free to skip this part, though I expect MissWicked ought to read it, since she’s the one who challenged me to do it): This poem was inspired by one of three scrolls that were shared by my tea school last year. They were meant to inspire peace in the hearts of people who saw them. My fellow students and I were tasked with serving tea while visitors came to admire the scroll. I admit my mood was cynical before I walked in the door (because hey, 2017 gave people a lot to be cynical about), but as the day progressed, I found myself becoming more peaceful with each bowl of tea I made, and living up to the words on the scroll—providing a small seed of peace for everyone who walked through Shofuso’s doors, and seeing folks leave carrying a bit of that peaceful spirit that (hopefully) they could share with others. 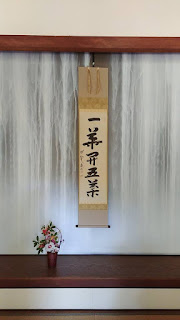 Now of course, 2017 doesn’t hold a monopoly on my moods of cynicism and doubt. Although I’m just coming out of the experience of finishing and publishing a short story collection, a giant cloud with the words “What’s next?” seems to have followed me around from the moment I clicked the button to officially release the book out into the world. The good news is I have lots of ideas. The bad news is that they all are spinning around me like a cyclone of bright shiny things I can reach towards but can’t quite grab. I’m overwhelmed.

The idea of achieving world peace is exponentially more overwhelming, but in that afternoon at Shofuso, I know that I along with my fellow tea students created a haven where peace could quietly slip into someone’s heart, and that peace could spread to people they interacted with later. If such a simple act can do that, maybe it’s not too far-fetched of an idea to take a moment or two to give myself the gift of tea, savor it, and see what comes from that. It’s worth a shot.