When she noticed it took her 2 minutes longer than it usually did to set out all the silverware for dinner, she knew there was a problem. He hadn’t seemed to notice though, nor did he remark about the tightness around her mouth or her wincing when she bent or moved in a particular way. The table was laid out as beautifully as it ever was, every spoon, fork, and knife in their expected places.

He had smiled, running a finger down the curve of the spoon at his place setting, but did not say a word to her as she managed to make it to the kitchen without crying out.

She allowed herself to stand and breathe deeply for thirty seconds once the kitchen door closed behind her. Was there enough time? A glance at the clock told her there was, but she’d need to be quick. The roast would be ready soon.

She pulled several hairs from her head. Her well-practiced fingers wove them into a serviceable thread in under a minute. I’m getting faster, she thought, letting her mouth relax into it’s first smile that day. Now came the hard part.

She had chosen her frock carefully this morning, both for its pockets and ease of opening in the front. Her special needle case came out first. She opened it and caressed the line of off-white needles. She remembered when each of these slivers of bone were parted from her body. What a waste it would have been not to save them. Selecting the largest, she threaded it with her hair then placed it on the table, so she could undo her dress.

As she pushed the needle in and out of her skin, her mind registered that the hole had indeed gotten bigger. It didn’t matter. She had woven enough thread to do the job. Gritting her teeth as she pulled her needle taut to seal up her flesh, she made the finishing knots and cut the needle loose with the kitchen shears. She cleaned off the needle and put it back into its spot inside her case. Then she rearranged her clothing and tucked the case into her pocket.

One more glance at the clock. She had timed it perfectly. Wearing her second smile of the day, she pulled the roast out of the oven and arranged it on the serving platter. The high from getting everything done kept her back straight as she walked from the kitchen to the dining room. Everyone is at their place now, along with the spoons, forks, and knives. Everyone watched as she brought it in.
She was not sure if the wrinkle in the carpet had been there before she went to the kitchen or if it had been made while she was there. Either way, she stumbled when her feet encountered it, and her pretense at gracefulness fell too. She managed to get the platter on the table with a loud thump, but she didn’t know if the thump was from the platter hitting the table or the sound her innards made when they burst from their seams to land besides the roast.

He turned away, covering his mouth with a serviette. "Why did you do that? Darling, you've made me so uncomfortable," he said.

She smiled her third and last smile of the day, one more beautiful and terrible than the ones that came before. 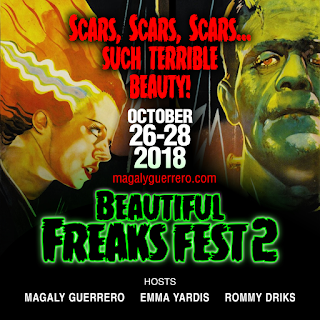 This short fiction was created for Beautiful Freaks Fest 2 and is an expansion on a poem I wrote earlier, Uncomfortable.
Posted by Rommy on Friday, October 26, 2018