Confessions of a Tarot Deck Hoarder: Blogging Around with Rommy Week 7

The blessing of too many choices

can be a comfortable trap.

I make room
for the things that sing
to me in my key.

This poem is linked to Imaginary Gardens With Real Toads' Tuesday Platform.

Liner Notes for this Groove:

“What kind of tea do you want?"

I frickin’ love tarot and oracle decks. Oh I know that there are people with a way crazier collection than mine, but many of those folks are professional readers. I mostly read for myself and a couple of my friends. I am trying to be very selective about the decks I pick up. Cool or pretty art is important but that doesn’t always guarantee I’ll get the deck. I’ve found myself opting to buy an art print from a deck instead of the whole deck if it doesn’t speak to me. But I’ve been pulled in by the beauty of decks like the Shadowscapes Tarot, the Spirit Keepers Tarot and the OstaraTarot. If a deck touches a bit of nostalgia I might pick it up too, like the Last Unicorn Tarot, or the Fairytale Tarot. If it makes me laugh like the Housewives Tarot or the Hello Kitty tarot, that piques my interest too. So when I saw there was a Philadelphia based tarot deck featuring Gritty on the Devil card, I did not fight my temptation too hard. 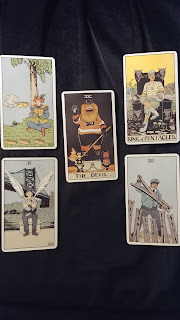 I mean... it's Gritty! And c'mon Will Smith as the Fresh King
of pentacles? Cups represented by cheesesteaks, the ultimate
comfort food? Of course I was an early kickstarter for this!

Realistically, I know that it’s silly to keep around decks I’m never going to read with. And I have gifted people with decks I wasn’t giving enough love too, but thought they might enjoy. I think I’m going to enjoy messing around with this deck for a while, so that will curb my impulses a little. I’ve learned to be similarly disciplined when it comes to writing projects. I have a few that are floating around in my head, but I’m not going to get anything finished unless I stick with the ones I’ve committed to bringing to fruition. I’ll still write down ideas and inspirations I get, but if they don’t fit a project, they’ll stay in my craft pile until I’m ready to give serious attention to it.


Song Choice: Philly Forget Me Not by Hall and Oates
Posted by Rommy on Tuesday, February 26, 2019

Email ThisBlogThis!Share to TwitterShare to FacebookShare to Pinterest
Labels: Blogging Around with Rommy, Imaginary Gardens With Real Toads, poem, Poetry