Valeria was alone. No one was here to see if she turned back. She flipped the switch on her sky skiff. The sail extended with a whoosh as the base lit up.  The familiar hum told her everything was working fine. She had done a good job rebuilding it.

She could power it off now. She could loan it to another rider so they could make the flight down the mountain and scavenge food or old tech from the cloud covered valleys below. Plenty of potential riders recently passed the qualifying tests, just as Valeria once did.

“There’s no shame in being a shaper,” Marco had said in a tone designed to needle her. But he had a point. Without shapers, there’d be no sky craft, and no way of getting the things they desperately needed. The other shapers also had been nothing but kind to her. It helped that Valeria had become quite skilled at building and fixing skiffs.

“There’s no shame in falling,” the head shaper had said. And that was true too. Better and more experienced riders had fallen during the sudden storms that popped out over the valley. A better one had the last time Valeria had gone wind-riding.

At that thought, the tears came again, just as Valeria knew they would. There’s no shame in tears, Marisol would have said.

Valeria looked out at the sky around her, clothed in the purples and pinks of dawn. There was no pride in keeping from doing something you loved either. Marisol never let anything or anyone keep her away from the thrill of the sky.

She could continue with the shapers. Valeria had made a place among them. But there was nothing to say a shaper couldn’t be a rider too.

Valeria wiped her eyes to get a clear look at the sky she adored. She felt the anticipation of being in the air eat the last bit of her fear and most of her sadness. In one quick move, Valeria got on the skiff and pushed off from the mountain. And then she flew. 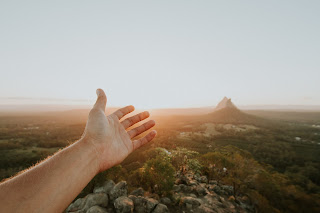 Photo by Cody Board on Unsplash
Song Choice: Back from the Dead by Halestorm

Liner Notes for This Groove: This piece of flash fiction was created for the Weekly Scribblings prompt at Poets and Storytellers United, The Last Time.