For Sarah, who wanted more of the story and for Max, who approved

Xander and Emma approached the door of the sprawling mansion carefully. The ragged looking human thrall at the gate let them pass without a question. Even if his tongue hadn’t been ripped out, he would have done so; Grandmother taught all of her servants to recognize her beloved grandbabies.

Xander ran a hand through his hair, hoping it would achieve the careless yet fashionable look his grandmother favored.

“Pigtails? You’re worried about your stupid pigtails. It’s not as if she wouldn’t take you out to any place you wanted to get your hair done.”

“But that’s so boring! Besides, anytime we go out together she’s always the scariest one. No one even pays attention to me.”

“Is that all you care about?”

The door opened, silencing their argument instantly. The servant that escorted them in was of a higher mental caliber than the one that greeted them at the gate. The creases in his butler’s uniform looked sharp enough to cut skin.

“Master Xander, Mistress Emma your Grandmother is waiting in the conservatory for you.”

“Thank you Bradford,” Xander snapped, all his nervousness replaced with impatient surliness.

The children walked through the foyer and down the long corridor towards the conservatory at the back of the manor. Emma stopped to look at the paintings. They were one of her favorite parts of Grandmother’s house. Every wall bore multiple images of Grandmother enjoying some great triumph. Emma had been told that she favored her Grandmother in looks, so she loved to imagine them as future glories of her own. She was particularly fond of the one where a very youthful Grandmother was caressing the head of a recently deceased American colonialist. A dainty trickle of blood highlighted Grandmother’s serene, deep ruby colored smile, her content look deeply contrasting with the agonized expression of the head in her lap.

A cough from Bradford pulled Emma out of her reverie. Bradford’s face showed no trace of annoyance but Xander’s expressed enough for the both of them. Emma just smiled and skipped to catch up with them.

The tea table was set up in the center of Grandmother’s conservatory filled with night blooming flowers from all over the world. Vines twined themselves around four large pillars around the center area and up to form a canopy of green dotted with pale pink blooms. Emma ran to the table when she saw her favorite included among the delights displayed.

“Come give us a hug my darling before you start gobbling things up like a wild creature! Really dear, you need to compose yourself more as you get older,” Grandmother said.

“Grandmother Amaryllis,” Xander with a formal bow. He hugged his Grandmother with more restraint than his sister had. After an enthusiastic hug Emma sat down and began scooping eyeballs onto her plate.

Xander just nodded. He never knew what to say to things like that and thought it’d just be easier to agree with her until he got around to asking her his question. He sat down. Emma had already poured herself half a cup of Earl Grey tea and was beginning to fill the other half with milk and sugar.

Xander saw his Grandmother’s right eye twitch ever so slightly at the 5th cube of sugar Emma added to her cup. He supposed he’d have to have some tea to make his Grandmother happy, but Earl Grey tasted like perfume to him and the surrounding scents from all the night blooming flowers didn’t help. He was about to reach for it when a maid came to the table bearing a small teapot and placed it besides his setting.

“It’s a special lemon blend,” his Grandmother explained. “Your mother said you much prefer it. Honey with your tea Xander dear? Emma darling, stop putting the eyeballs into your teacup.”

Xander turned to thank the maid, letting his eyes linger a bit longer on her than he intended. It wouldn’t do to let his Grandmother see that! He hoped that she was too busy scolding Emma to notice (her pigtails were in fact not straight enough for Grandmother’s standards). He poured tea into his cup and took a scone, spreading it thickly with Grandmother’s special clotted jam. Its warm metallic taste always settled him a bit when he was tense. Now if he could just think of a good way to ask Grandmother Amaryllis for help…

“Xander has something to ask you,” Emma said with a mouthful of ladyfingers and cream.

“What?” Emma said, crunching on the remains of a last ladyfinger. “You need help and Grandmother won’t say no.”

“What’s this Xander?” Grandmother asked. “Darling, you musn’t keep things from me. You know I will always help if I can. Now what is making my sweet boy look so sour?”

“Manners Emma. No laughing with your mouth full.”

“But if I laugh with my mouth closed and full of food I could choke and die.”

“Nonsense sweeting, you’re already dead. Xander, I mean it. I will find out sooner or later so you had best tell me now.”

Xander looked at his plate and mumbled. “Back at our house. In the basement.”

Grandmother Amaryllis called for Bradford to bring the car around and soon she, Xander and Emma arrived at the children’s house.

Together they looked at the corpulent, trembling man bound in the basement.

“That’s a senator,” his Grandmother said.

“This is not a good idea. Do you know why?” his Grandmother asked.

“Ooh! Ooh! Because he’s still alive and it’s bad to waste food. You should let me eat him while Xander watches as punishment,” Emma said.

He calmed himself down and looked at his Grandmother. “Because we have to choose our victims carefully so that no one notices too much and a senator going missing is big news.” Xander looked at the man with disgust. “But Grandmother, he told lies!”

“My pet, all politicians do! You can’t go about killing them every time they do.”

“That will do Emma,” Grandmother said and Emma fell silent. “Alright, I can settle this matter quite easily. Bradford, take the children back to the manor so they can enjoy the rest of their tea snacks. Oh and call my personal stylist. Emma, it’s time to get your hair trimmed again, it’s looking scraggily.”

She waved him off. “Of course sweeting. That’s what grandmothers are for! Now run along with Bradford and enjoy your tea. This won’t take too long.”

After they left, Grandmother smiled at the senator. “My grandson is right. You tell a great deal of lies. I was going to have some of my people contact you to see if there were some mutually beneficial arrangements we could come to. Nothing too outrageous. I have several ongoing agreements with many of politicians. But I’m afraid this will complicate things.” She smiled, showing her fangs off to full advantage. “You have two choices. One you chose to work with me as I originally intended. I shall still have to punish you for my dear Xander of course. I’ll just remove your right arm so I can give it to him as a gift. Don’t worry. I have mages on retainer that can conjure you a new one. Of course, it won’t really work as well as your original one, but it will do. Refuse me, and your head will be found in some desert somewhere after I have evidence planted that you were secretly dealing with a drug cartel. It will look as if you meant to cross them so they had to retaliate. Which do you chose?”

The senator’s eyes were blank and glassy. Grandmother put her ear to his chest. “How dare you have a heart attack while I am speaking to you!”

Grandmother Amaryllis contemplated the body. Emma was right. It was a shame to waste good food and the senator looked like he held plenty of blood. She barely touched any of her tea snacks and was rather hungry. Yes, it would be easiest to just arrange for his body to be found someplace since he expired of natural causes, more or less, but it would also be quite helpful to carry out her head in the desert scenario as a warning to some of her other human associates. Plus there was that issue at lunch she needed to deal with.

She rummaged through her purse to pull out her cellphone. “Bradford, please come back around and bring my machete. Oh and please bring the maid that attended us at tea today. No, no, I don’t mean to kill her. If she had flirted with Xander it would be a different thing completely. I just would like her to help me with this body so she understands what happens to people who vex me. My grandson will marry a vampire with wealth and impeccable standing if I have anything to say about it. Thank you.”

This post is part of Holly's Horrorland's Blog Party, Vampire Day Soiree and is the second story about Xander and Emma. You don't need to have read the first to enjoy this one, but if you'd like to check it out, it's here. 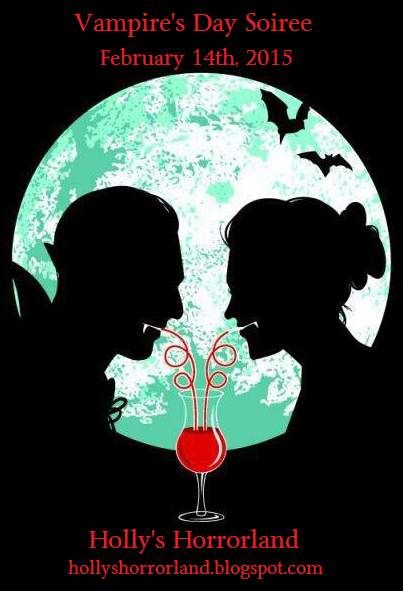